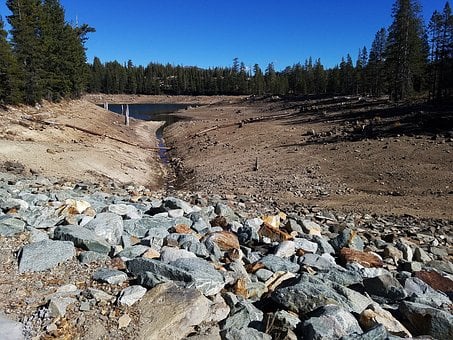 Californian measures to protect freshwater fish hit by drought. The California Department of Fish and Wildlife (CDFW) and the National Oceanic and Atmospheric Administration (NOAA) Fisheries have announced a Voluntary Drought Initiative designed to protect populations of salmon, steelhead, and sturgeon from the effects of the current unprecedented drought.

The initiative provides a framework for water users to enter into individual agreements with the two agencies to maintain enough water for fish spawning and survival, and implement other collaborative actions like fish rescue, relocation, monitoring, and habitat restoration. In return, landowners and water users will benefit from a simplified permitting process under the federal and state endangered species laws and may receive incidental take authorisations for California Endangered Species Act (CESA)-listed fish in case a participant unintentionally takes a listed fish species. While individual agreements under this initiative expire December 31, 2021 and may be renewed on an annual basis, prospective participants may enrol at any time.

“This severe drought impacts all of California and presents unique challenges for salmon, steelhead, and sturgeon listed under the Endangered Species Act,” said Barry Thom, Regional Administrator for NOAA Fisheries, West Coast Region. “To help imperilled fish survive these conditions, we are asking private landowners to work with us and CDFW to implement actions that may protect sensitive aquatic ecosystems as part of a Voluntary Drought Initiative.”

As an example of how the initiative can be beneficial, in 2014 CDFW worked with Los Molinas Mutual Water Company on Mill Creek in Tehama County. The company provided access through its properties for fish population monitoring and provided flows in the creek for the benefit of spring-run Chinook salmon.

“Drought conditions create substantial challenges for many landowners or water users throughout California,” said CDFW Director Charlton H. Bonham. “NOAA and CDFW have found that open dialogue with drought-affected landowners or water users regarding voluntary steps to reduce significant risks to federal- and state-listed species from drought has been an effective way to achieve mutually beneficial outcomes.”

A nearly identical initiative was created during the drought of 2014, but that agreement only applied to a few priority watersheds like the Klamath, Russian, and Sacramento/San Joaquin and it concluded with the end of the drought. The new Voluntary Drought Initiative does not expire but will instead be considered a “living document” that can be updated by NOAA Fisheries and CDFW at any time. Additionally, the new, ongoing initiative allows for agreements in any watershed within the state containing salmon, steelhead, or sturgeon listed under the federal Endangered Species Act or CESA, when and where determined a high priority by CDFW or NOAA Fisheries.

The Voluntary Drought Initiative represents the shared vision of NOAA Fisheries and CDFW that voluntary, collaborative solutions memorialised in writing can best minimise the impacts of water use on participating individuals and entities as well as vulnerable species, while providing improved regulatory certainty for local communities during drought.