MARINE LITTER IN NORTH SEA TO BE MAPPED

MARINE LITTER IN NORTH SEA TO BE MAPPED 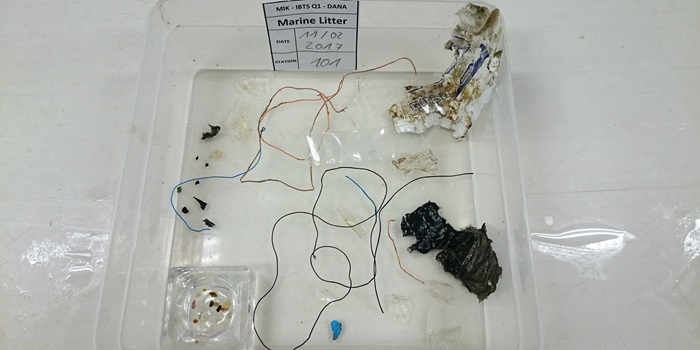 Marine litter in the North Sea to be mapped according to a recent article published on the DTU website (Technical University of Denmark).

How much marine litter is floating around in the water column of the North Sea? How is it distributed, and what type is it? This will now be mapped in a new research project.

Bastian Huwer, a researcher at DTU Aqua, has now received a research grant from the VELUX FOUNDATION to record and analyse the litter items he has collected to find out how much and what types of litter are floating around in the North Sea and, if possible, identify the sources of some of the most common types.

The litter has been caught as bycatch in annual herring larvae surveys carried out by DTU Aqua in collaboration with most other countries around the North Sea as contribution to the assessment of how the herring stock is expected to develop.

“When I became responsible for our herring larvae survey in 2014, I immediately noticed that—in addition to herring larvae and other plankton organisms, a lot of junk also ended up in the samples. So I thought it would be interesting to sort out the litter pieces, since we had to go through the samples anyway to find the herring larvae. I started analysing the litter samples on a small scale, and soon I got a feeling that there are some exciting spatial patterns,” says Bastian Huwer.

What types of litter?
The internationally coordinated herring larvae surveys are conducted every year in January/February according to clearly defined standard procedures. Denmark and the other countries around the North Sea carry out the surveys at the same time and with the same equipment every year, and together they cover the entire North Sea as well as Skagerrak and Kattegat. After Bastian Huwer told his fellow researchers from the other countries about the patterns he was beginning to see in the Danish samples, they have also been collecting the litter—and have sent it to him.

“So now I started receiving badly smelling garbage bags from Sweden, Germany, the Netherlands, and who else is involved in the surveys. It suddenly became too much litter to handle without a dedicated project, so I’m really happy that the VELUX FOUNDATION became interested in supporting the marine litter investigations. Now I have the opportunity to dig into the details and analyse all samples very precisely, and it will be interesting to see the big picture in the entire North Sea,” says Bastian Huwer.

The preliminary patterns show, among other things, that almost all litter is plastic and that there are only a few other items such as aluminium foil and pieces of wood products.

How much litter?
The herring larvae surveys are conducted with a fine-meshed plankton net that (see photo below) is dragged in a V shape from the surface to three metres above the sea floor and up again. This means that herring larvae—and litter—are collected in the entire water column, which makes the litter survey very unique. In other marine litter studies, bottom trawls have typically been used to collect litter located on the seabed or fine-meshed nets for collecting litter on the sea surface—or the surveys have looked at litter washed up on beaches.

“What makes this survey unique is that we are sampling in the water column, as there is so far actually not much knowledge available about marine litter in the water column. In addition, we also have small flow meters inside the plankton net. It is a small propeller gadget that counts how much water we have filtered and allows us to quantify the amount of litter per cubic metre of water,” says Bastian Huwer.

Where does the litter come from and where is it most abundant?
The Danish sampling area in the North Sea is a broad “belt” between Denmark and England. The first,very preliminary estimates suggest there is a lot of waste along the west coast of Jutland, much less near England, and hardly anything in the middle of the North Sea.

A large part of the litter near the coasts are blue or orange plastic threads, which are likely to originate from so-called “dolly ropes”. Dolly ropes are used as a kind of mat to protect bottom trawling nets against wear and tear. Their use is particularly common in beam trawl fishery, which mainly takes place in the southern part of the North Sea. Based on some of the Danish samples, preliminary estimates suggest that there are several tonnes of this kind of plastic threads floating in the Danish part of the North Sea.

In collaboration with his DTU Aqua colleagues Ole Eigaard and Asbjørn Christensen, experts in fishing pressure and ocean currents, respectively, Bastian Huwer will study whether the litter originates from dolly ropes—or possibly other fishing gear—and they will also look into where the plastic threads floating along the shores of Denmark come from.

“We have some knowledge of where beam trawl fishing takes place. We use that information to identify potential source areas for drift modelling, where we start virtual plastic pieces in areas with heavy beam trawling activity to see where they end up. Then we compare with the plankton samples and see if there is an overlap between the drift patterns and our observations,” he says.

The project, called ‘MARLINS—Marine Litter in the Water Column of the North Sea’, starts in October 2018, runs over two years, and is supported by the VELUX FOUNDATION. The first step is to sort, categorize, measure, and weigh the litter already collected—piece by piece. Bastian Huwer will start collecting litter again next year on an expedition in January/February, and—in addition to what he collects himself—he will also receive marine litter from his collaboration partners:

FIGHTING THE WEIRD AND NOT SO WONDERFUL PESTS IN TAURANGA WATERS
Fish Focus October 16, 2018