M&S HAS NAMED SCOTTISH SEA FARMS TEAM AT WYRE, ORKNEY AS ITS OUTSTANDING PRODUCER OF THE YEAR 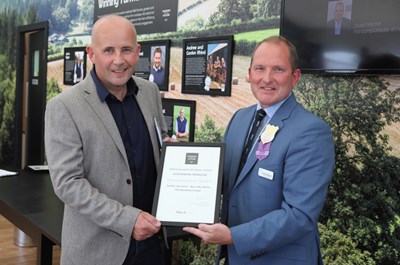 The 1,909-tonne capacity farm, which was established by Scottish Sea Farms in 2015 to help meet the growing demand for responsibly farmed salmon including M&S Lochmuir salmon, differs from most other farms in that it performs a special dual role.

Not only does it rear its own salmon from smolt to adulthood, but it also acts as a nursery for young salmon headed to neighbouring Eday where conditions are more tidal. Only once the salmon are large enough to thrive in the strong tidal flow are they transferred out to Eday.

This efficiency was one of four Awards criteria that set Wyre apart in its category. Judges were equally impressed at how much the team, ably led by Phil Boardman who until recently was also Farm Manager of Eday, had achieved with regards to:

The combined result over the last crop was no escapes, no seals shot, no medicinal bath treatments and low mortalities.

Says Phil Boardman: “Both farm teams – Wyre and Eday – are proud of the results achieved and rightly so as both have worked hand in hand to create the best environments in which to rear our salmon. We have a really great mix of people, some of whom are locals while others have moved into the area bringing new skills and knowledge.”

One such new face is 27-year old Matthew Jackson from Milton Keynes who joined Scottish Sea Farms as a graduate trainee and worked under Phil’s tutelage while gaining a Modern Apprenticeship in Aquaculture to Level 3, and will now take over as Farm Manager of Wyre enabling Phil to focus on Eday.

The Awards presentation took place on the first day of the Royal Highland Show at Ingliston in Edinburgh. Accepting the Outstanding Producer Award on behalf of the Wyre team was Scottish Sea Farms’ Orkney Regional Manager, Richard Darbyshire, who said: “Scottish Sea Farms sets itself exacting standards and the results show in the quality of our product. M&S have actively encouraged these high standards since day one, however to have them recognised with a Farming for the Future Award provides added motivation to keep seeking new and better ways of doing things.”

The Outstanding Producer title is the latest in a series of M&S Farming for the Future Award wins for Scottish Sea Farms, with previous successes including the Innovation Award, Young Producer, Rural Communities, Global Champion of Champions and Plan A in Action.