Information about catch of fish which are published in this press release are preliminary figures. The data is gathered by the Directorate of Fisheries. 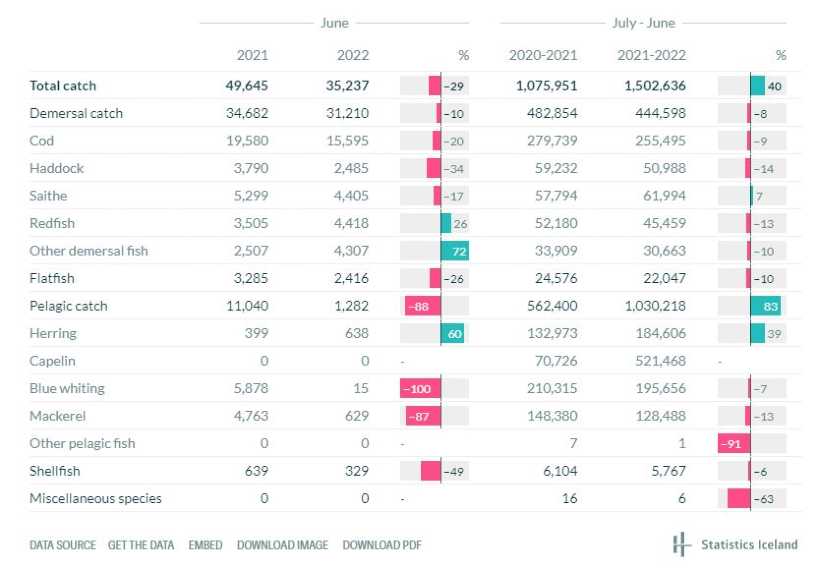 Fiskistofa, the Directorate of Fisheries is an agency of the Ministry of Food, Agriculture and Fisheries.  The  Directorate’s task is monitoring fisheries and the daily administration of the fisheries management system in Iceland.

This involves  issuing of  fishing permits, distribution of quotas and overseeing the daily operation of the individually transferable quota system. The Directorate has the authority to revoke fishing licenses and impose sanctions in cases of over-fishing and non compliance with rules.

The Directorate collects data on all landed catch from ports of landing in real time as well as information on  processing and exports of fish products. The Directorate monitors the operation of fishing vessels, the weighing in of landed catch and processing of fish both on site and through electronic surveillance such as through  vessel monitoring systems which the Agency runs in cooperation with the Coast Guard of Iceland.

The Directorate of Fisheries was established in 1992 in order to take responsibility for various tasks previously undertaken by the Ministry of Fisheries and several other government agencies. The Directorate employs approximately 64 people, representing a wide spectrum of experience, education and expertise. The headquarters are in Akureyri, additional offices are in Hafnarfjördur, Stykkishólmur, Ísafjördur, Akureyri, Höfn and Vestmannaeyjar.

The Directorate works in close cooperation with the Ministry of Industries and Innovation, the Marine Research Institute of Iceland,  the Coast Guard and the Food and Veterinary Authority of Iceland as well as other agencies serving the fisheries sector, both in Iceland and internationally.

The Directorate of Fisheries is responsible for fisheries management in the Icelandic exclusive economic zone as well as Icelandic fisheries outside Icelandic jurisdiction. The Directorate also has administrative responsibilities and monitors fishing of salmonids in lakes and rivers and oversees whaling.