Filmed aboard HMS Belfast on the Thames in central London and introduced by historian and TV presenter Dan Snow, with round the world sailor Tracy Edwards, National Historic Ships UK’s annual awards ceremony is a celebration of maritime heritage around UK coasts, lakes, and rivers.  It encourages people of all ages and backgrounds to engage with static and operational historic vessels through photography, volunteering, conservation, online activities and skills-based training.

In honour of NHS-UK’s late Director, Martyn Heighton, the Excellence in Maritime Conservation Award is now in its second year.  Launched to mark best practice in the conservation of historic vessels, this Award boasts a hand carved trophy that was commissioned using wood previously removed from HMS Victory and gifted to NHS-UK courtesy of the National Museum of the Royal Navy (NMRN). 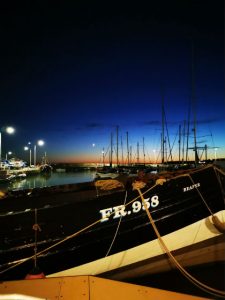 This year’s recipient of the Award is the Scottish Fisheries Museum for their three-phase conservation of the historic fishing boat Reaper; from initial survey work and creation of a formal Conservation Management Plan to her return to Anstruther Harbour to celebrate the start of the 50th Anniversary Year of the Scottish Fisheries Museum on 4 July 2019.

“We are thrilled to get this award in such a testing year for us and all Museums. It is a real team effort and could only have been achieved with high quality input from a large number of people. Sincere thanks go to Cabinet Secretary Fiona Hyslop and the Scottish Government for supporting the project financially and ‘Coastal Communities’ for funding the conservation management plan. Thanks to Leonardo Bortolami, Adam Way and team and Babcock international for undertaking the highly demanding and high quality spec and to trustees, staff and volunteers, notably the Boats Club, in devoting so much time and effort into seeing our iconic fishing boat ‘Reaper’ return to Anstruther with her hull fully conserved. We hope that further work will progress on the internal fit-out and new masts during 2021 and that she will soon be able to take to the sea again.”

The Awards Ceremony was streamed via the National Historic Ships website at www.nationalhistoricships.org.uk/page/awards-2020.  It included the graduation of the Shipshape Heritage Training Partnership 2 ship-keeping trainees, one of whom, Hannah Fraser, is based at the Museum and has contributed towards the Reaper conservation project.

We congratulate Hannah on the successful completion of her traineeship and wish her all the best for her future in the heritage sector.