However, if they are to really be successful they need to be combined with better long-term monitoring by communities and conservationists to ensure their timing and location achieve the best results.

Those are the key findings of a new study, one of the first of its kind to examine the effectiveness of targeted lionfish removals from both an ecological and a socio-economic perspective.

Scientists working as part of the European Union-funded RELIONMED project teamed up with specially trained divers and citizen scientists to conduct a series of removal events and surveys over a six-month period. 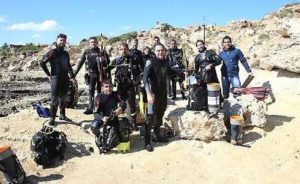 Focused on three marine protected areas on the coast of Cyprus – the Zenobia shipwreck off Larnaca, and two popular diving sites within the Cape Greco Marine Protected Area – between 35 and 119 lionfish were removed per day by divers at each protected site.

Those sites were then monitored by divers over several months which showed that, in some locations, population numbers recovered within three months.

As a result, scientists writing in the Aquatic Conservation: Marine and Freshwater Ecosystems journal, say such initiatives can undoubtedly be effective in reducing population numbers.

However, they need to be carefully coordinated to ensure the lionfish are eliminated – including the potential for them to be overfished – in a manner that doesn’t have other negative impacts on other species.

The research was led by researchers at the University of Plymouth (UK) and Marine and Environmental Research (MER) Lab (Cyprus). They have been collaborating for several years as part of the €1.6million RELIONMED project, which aims to assess the history of the lionfish invasion in Cyprus, and identify ways to minimise its future impact.

Lionfish first began populating the Mediterranean less than a decade ago, as a result of expansion in the Suez Canal and ocean warming.

The species was first recorded off the coast of Cyprus in 2014, with a lack of common predators – coupled with lionfish’s breeding habits – meaning numbers have increased dramatically with sightings everywhere from coastlines to the deep seas.

The first targeted removals took place in May 2019, having proved successful in areas previously invaded by lionfish, and they have been combined with education programmes around the threats the species pose and how it might be managed sustainably.