WESTER ROSS FISHERIES ON THE BEEB

Wester Ross Fisheries Ltd., the oldest independent salmon farmer in UK, starred in BBC2 programme ‘What Britain Buys and Sells in a Day’ on Monday evening prime time, last week and can be viewed on BBC iplayer.

Company’s Director, David Robinson, took the presenter Cherry Healey to the Ardmair Farm located in Loch Kannaird near Ullapool. They spent the majority of the day on the farm, hand-feeding the salmon and talking about sustainable farming of the seas. David and Cherry further discussed clever distribution chain which allows farmers such as Wester Ross to process and deliver their products to discerning customers all around the world in record short time. 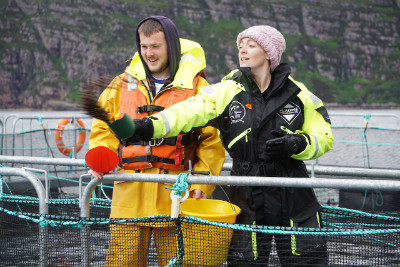 The programme highlighted the importance of salmon farming in Scotland and industry’s positive impact on rural economy; with over 2,500 people being directly employed in the production of Scottish salmon and further 8,000 jobs in the supply chain.

Moreover, the programme touched on Brexit-related issues: “Putting businesses with our nearest neighbours in a state of flux.. makes long-distance markets” more attractive. There are hopes that “Britain’s most important seafood export (salmon).. continues to expand”.

Gilpin Bradley, Managing Director of Wester Ross Fisheries said,’being on What Britain Buys and Sells in a Day was not just a good promotion for our salmon but also for many successful businesses operating in rural areas of Scotland’.

Wester Ross Salmon, being the smallest salmon farmer in Scotland, was presented as a high-end salmon producer. Gilpin Bradley cleverly explained the difference between the volume of production of the major players on the international market and the niche market of Wester Ross Fisheries in a nice comparison between the cake, being the high volume producers and the icing of the cake, being the smaller farmers; he said, ’we are not even the icing on the cake; we are the sprinkles on the top of the icing on the cake’.