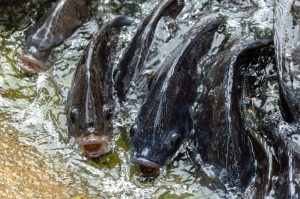 The project is a significant step forward in sustainable aquaculture in the area, and began with Xelect experts providing the partner farms with on-the-ground training in the best methods to take tissue samples. The samples were then brought back to Xelect’s custom built laboratory in Scotland for DNA extraction and genetic analysis. This data will help East African Tilapia producers be used to create long-term, sustainable breeding programme plans.

Operations Director, Dr Tom Ashton, who recently returned from a follow up visit in Kenya, commented: “We’re delighted to be working with East African tilapia hatcheries. Despite occasional interruptions from a hippo and monitor lizards we’re now a major step closer to helping with regional food stability for the area”.

2020 has already been a period of considerable expansion for Xelect, as they have secured 6 new partnerships in recent months. They also recently announced an expansion of their breeding programme management team, a new rapid response genetics service and have made a number of key hires in genetics and marketing.

CEO Professor Ian Johnston believes this growth is due to an increasing maturity in the market. “With so much inward investment in the industry we’ve reached a tipping point. We believe the market will ultimately fracture into major producers, using the latest genetics best practice, and smaller local operations. Investors would be very unwise to commit significant resources to aquaculture operations if they don’t truly understand and protect the genetic capital of their broodstock.”