Consumers want UK supermarkets to tackle dolphin deaths, survey reveals. Shoppers care about dolphins being killed in fishing gear and expect supermarkets to sort it out.

A OnePoll survey commissioned by two leading marine conservation organisations (Whale and Dolphin Conservation and Sustainable Fisheries Partnership) has revealed that the vast majority of consumers want UK supermarkets to take action on the harm some of the fish and shellfish products they sell cause to dolphins, seabirds and turtles, and that the big supermarket chains should be doing more to put pressure on fishers to prevent the bycatch of dolphins and other sensitive species. 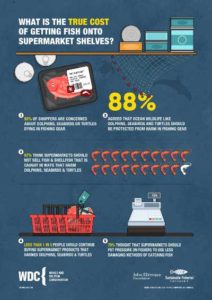 A massive 85% of shoppers are concerned about dolphins, seabirds or turtles dying in fishing gear and 87% think supermarkets should not sell fish and shellfish that is caught in ways that harm these creatures.

Bycatch (incidental capture in nets) is the biggest direct killer of dolphins and seabirds around the globe and a huge issue in UK waters, yet many consumers were unaware of the cruelty involved and that hundreds of thousands are bycaught globally every year, including thousands in the UK.

88% of the 2000 people surveyed agreed that ocean wildlife like dolphins, seabirds and turtles should be protected from harm in fishing gear. Two thirds of shoppers would seek to avoid supermarket products that harmed dolphins, seabirds and turtles (less than 1 in 5 people responding would actually keep buying these products), and 70% thought supermarkets should be putting pressure on fishers to use less damaging methods of catching fish.

“Consumers have sent a clear message to UK supermarkets that they will not accept dolphin, seabird and turtle bycatch, and that supermarkets need to take action now to stop bycatch in the fisheries that put fish and shellfish on supermarket shelves.”

“Consumers clearly expect supermarkets to make sure that the seafood they sell does not cause harm to dolphins, seabirds, turtles and other marine wildlife. Supermarkets need to identify the problems in their supply chains, work with their suppliers and make sure that there are real changes on fishing boats to prevent further harm. Asda in the UK has already taken steps to evaluate the risks and take action to tackle the problem of bycatch and we hope that other businesses will do the same.”

“Earlier in 2021, WDC and SFP achieved a breakthrough commitment from Asda to protecting endangered, threatened and protected marine species (such as dolphins, seabirds and turtles) from being accidentally killed in the fisheries that supply its stores with fish and shellfish. That commitment includes changes in procurement and seeking to end purchase of fish caught in damaging gill nets. Other UK supermarkets must step up to tackle the challenge set by consumers.”