Chief executive Jimmy Buchan outlined how Brexit and Covid-19 had combined to create a perilous situation for companies, with production and export capacity severely reduced. 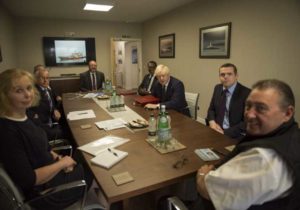 “I along with others from the catching sector made it plain to the Prime Minister that the Brexit deal had fallen far short of expectations.

“And most pertinently for the processing sector, I sought an assurance that the Government would work closely with us to resolve the critical shortage of labour.

“He agreed that a campaign was required to encourage young people into the industry and on the need for direct action to stem the haemorrhage of overseas workers that has occurred since the 1st of January.”

Mr Buchan agreed to carry out further discussions on how to move forward with Scotland Office minister David Duguid.

The Scottish Seafood Association (SSA) was formed in 2011 in response to a growing need for a national body to represent the whole of Scotland’s seafood, processing and trading sectors. We now have around 70 members from across Scotland. Almost half of the 12,000 jobs supported by the UK processing sector are based in Scotland (5000, with 3800 in Grampian alone).