Nambikkai fish farmers group in Tamil Nadu has won the this year’s ‘Best Fisheries Self Help Group’ award instituted by the National Fisheries Development Board (NFDB) under the Ministry of Fisheries, Animal Husbandry and Dairying. The self help group from Pattinapakkam in Chennai bagged this award for successfully adopting the technology—conversion of fish wastes into value added products—developed by the ICAR-Central Institute of Brackishwater Aquaculture (ICAR-CIBA). In yet another recognition for the research initiatives of Chennai-based institute, a start-up company from Andhra Pradesh Sai Aqua Feeds who adopted the technology of CIBA in formulating feeds for shrimps won the Best Fisheries Enterprises award. Having included a financial incentive of Rs. 2 lakh , both the awards come under the category of the best enterprises or entrepreneurs.

‘Waste to Wealth’ initiative wins recognition
Nambikkai fish farmers group started functioning during 2017-18 under the aegis of CIBA to commercialise the latter’s ambitious technology of recycling fish wastes to develop value-added  products named Plankton plus and Horti plus.  While the product Plankton plus is used in aquaculture system to boost and maintain the healthy plankton blooms, the Horti plus is used as an organic manure in horticulture. The products are developed under the concept of ‘Waste to Wealth’ initiative of CIBA in line with the Swachh Bharat mission of the central government. 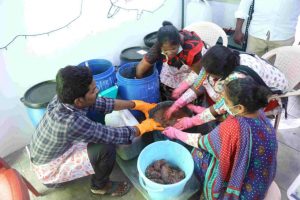 Constituted by the CIBA under the Scheduled Cast Sub Plan Scheme (SCSPS) of the government of India, the start-up processing unit of Nambikkai self-help group produced 16, 345 kg of value added products and attained an annual turnover of Rs. 1.68 million. The group has seven fishermen members, all from the Scheduled Cast community, being four of them are women. Even at he tough time of COVID-19 pandemic, the group managed to earn Rs. 2 lakh as livelihood support. The group is collecting fish wastes from markets and fish trimming from fish processing companies persistently and producing the value addition.

“This technology of CIBA has the potential to propagate across the country in cleaning the fish markets and also providing alternative livelihood to many as a circular economy”, said Dr KK Vijayan, Director of CIBA.

“We are very much excited to receive this achievement. This award is a recognition of our hard-work and gives enormous confidence to upscale the production”, said T Kennit Raj, Head of the self-help group. The CIBA’s training was very much effective in materialising its technology in a viable way, he added.

Low-cost Desi Feed recognised
Sai Aqua Feeds received the Best Fisheries Enterprises award for commercialising the indigenous shrimp feed Vannamei plus developed by the CIBA. Formulation of this feed on a commercial scale by the Andhra-based company helped reducing the production cost in shrimp aquaculture in the country and effectively contributing towards doubling of farmers’ income.

According to Dr K K Vijayan, CIBA’s technology focused on addressing the higher production cost in shrimp farming owing to the costly foreign feeds and introduced Vannamei plus  in line with the Make in India concept of government of India. “In shrimp aquaculture, the feed constitutes around 60 per cent of the production cost. Further, this Desi Feed is a compliment to shrimp feed sector in India, which is mostly led by multi-national feed companies being the front runners in the sector”, he said. 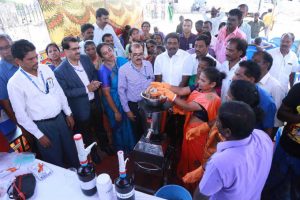 The company started operation in 2017 and had an overall production of 7633 tonnes of shrimp feeds in the brand “Vasanthi Premium” with an average annual production of 2585  tonnes. An overall turnover of nearly Rs. 5cr. was earned by the Sai Aqua Feeds by producing desi shrimp feeds. Hundreds of shrimp farmers are still getting the benefits of this feed in their aquaculture ventures. It is estimated that the production cost could be reduced by 20 per cent with the commercialisation of CIBA’s desi feed technology. Many shrimp farms in Guntur district remained unaffected by the COVID-induced lock down as the company produced the feeds and managed to supply them using the available logistics. Apart from Andhra Pradesh, the service of the company is available in Tamil Nadu, Kerala, West Bengal and Odisha.

The award were presented by Shri Pratap Chandra Sarangi, Union Minister of State for Fisheries, Animal Husbandry and Dairying at a function held at New Delhi on Saturday.

The winning of the esteemed awards mark that CIBA’s technologies have enormous impact in the development of aquaculture sector in the country, said CIBA Director Dr KK Vijayan. “We are happy that the technologies developed by CIBA reach out to the targeted community and emerge as the best livelihood option for them”, he added.