A team of twenty- five staff from the award-winning Kimpton Blythswood Square Hotel visited the Firth of Forth Lobster Hatchery in North Berwick to donate £2,000 on behalf of iasg, the hotel’s seafood restaurant.

Opened to the public in November 2021, iasg is centred around serving seafood from the waters of Scotland in the most sustainable way possible, for example, by only using hand-dived or creel-caught shellfish where there is a healthy supply.

As part of this, the team is dedicated to supporting charities that align with the restaurant’s sustainable practices with diners given an opportunity on this occasion to donate £1 from their food bill to the Lobster Hatchery raising a total of £1,000 which was matched by the hotel bringing the grand total to £2,000. 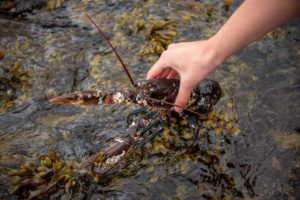 During the visit, the Kimpton team saw first-hand the vital work of the charity before releasing female lobsters into the Firth of Forth.  They also learnt about the life cycle of the shellfish from the most vulnerable stage at just 12 weeks old to pelagic larvae, and finally into juveniles which are then released into the wild.

The Firth of Forth Lobster Hatchery was established to support the fishing communities of East Lothian & Fife and strengthen the local marine ecosystem with the hope of increasing the populations of crabs, langoustines and oysters, as well as lobsters. As one of Scotland’s only hatcheries, the team aims to release 20,000 lobsters each year to contribute to stocks for the long-term economic benefits to fisherman.

The donation from Kimpton Blythswood Square will be used to rear around 700 juvenile lobsters, which will eventually be released into the Firth of Forth. With local lobster populations facing a number of challenges due to over-fishing worldwide, the charity is dependent on donations to support its essential conservation work.

Mafalda Albuquerque, general manager at Kimpton Blythswood Square Hotel, said: “iasg serves the finest, sustainable Scottish seafood to our customers and with that, it’s important for our team to learn and encourage the ongoing development of Scottish lobster conservation.

“Since opening the restaurant last year we’ve worked with our customers to raise money for the charity and show our appreciation for the important work they do in protecting Scotland’s shellfish which is world renowned. We hope our donation will assist with the work of the charity as they continue conduct valuable research and time into improving the survival rate of the lobsters.”

Jake Norton, Hatchery director at Firth of Forth Lobster Hatchery, added: “This fantastic donation from Kimpton Blythswood Square is integral in allowing us to continue our work of enhancing the fishery and local environment.

“As a centre for education and knowledge sharing it was great to show the iasg restaurant team how we have progressed over the years – we’re excited to see what the future holds with their support.”