Pacific Ocean Halibut Decline – Managers of halibut in the Pacific Ocean are reporting another year of declining stocks in most areas of the coast. The International Pacific Halibut Commission oversees management of the fish along the coast from Alaska to California. The commission held its interim meeting Tuesday and Wednesday, November 27-28 in Seattle and heard about the latest stock assessment of the valuable flatfish.
IPHC scientists do annual survey fishing to come up with the stock assessment, along with information from commercial catches and other fisheries along the coast.
“We estimate that the stock went down until somewhere around 2010 from historical highs in the late 1990s,” said Ian Stewart a quantitative scientist with the commission. “It increased slightly over the subsequent five year period and around 2015 or 2016, the stock leveled out and has been decreasing in spawning biomass slowly since that time period.” 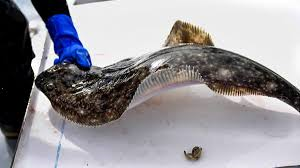 Spawning biomass is the estimated total weight of fish that are old enough to reproduce. The commission’s annual survey showed the numbers of halibut coast-wide dropped by six percent from year before. The estimated weight of fish legal to catch in the commercial fishery dropped by 19 percent from the year before in Southeast area 2C and three percent in 3A, the central gulf.
The commission has been expanding its survey up and down the coast. New survey points were added in Southeast Alaska and British Columbia in 2018.
Stewart told commissioners that there’s a high probability that halibut stocks will continue to drop at the current level of fishing because of less productive years for the fish between 2006 and 2010.
“The fishery is becoming increasingly focused on those low years between 2006 and 2010,” Stewart said. “And given the data we have in hand right now I think we can be pretty certain that those year classes between 2006 and 2010 are probably quite low. And those are going to have a strong effect on the projections over the next several years, both for what’s available in terms of fishery yield as well as what’s going to be likely the trend in the spawning biomass over the next several years.”
Total mortality of halibut in 2018 was estimated at 38.74 million pounds. That includes fish killed in commercial, subsistence and sport fisheries along with bycatch in other fisheries. That number is down from the nearly 42 million pounds caught in 2017. The commercial catch in 2018 coast-wide was around 23.5 million pounds, the lowest catch in the past decade.
IPHC scientists don’t present recommendations for catch limits but give the commission a table that shows probabilities of future stock declines based on various levels of fishing. The commission is made up of six members, three each from the U.S. and Canada.
Decisions on the coast-wide catch limit and limits for different regulatory areas will be during the IPHC’s annual meeting at the end of January in Victoria, British Columbia.