In what’s believed to be a first in Scottish salmon farming, Scottish Sea Farms is piloting a bespoke hybrid power system aboard one of its feed barges, dramatically reducing fuel consumption, carbon emissions and operating costs.

The initiative, at the company’s Spelve farm on Mull, is part of Scottish Sea Farms’ drive to make its activities more sustainable and contribute to the Scottish Government’s ambition to be net zero by 2045.

The results, after just four months, have been ‘fantastic’, achieving cost savings as well as environmental benefits, according to Spelve Farm Manager Alan Tangny.

‘We used to be filling our diesel tank at least once a week and now we’re probably getting four times longer between fills,’ he said.

Designed, built and monitored by Aqua Power Technologies, the hybrid concept has been shown to offset 32,408kg in carbon since the pilot began in September. That is comparable to the weight of a standard fuel tanker of 32,000 litres.

Contained within a 2m long cabinet, the hybrid system includes 24 batteries and a control panel. It works alongside the conventional diesel generator, intelligently monitoring the power demand and seamlessly switching between generator power and battery power.

At times of greater demand, during feeding for example, power is handed back to the diesel generator which simultaneously charges the hybrid’s batteries.

During lower demand, the hybrid takes over, remaining on 24/7 to power comparatively low loads such as environmental logging systems and lights.

The technology, said Aqua Power founder Sam Etherington, has been in existence for 20 years and is typically used in cars, underground trains and off-grid homes.

But it had not been deployed on a salmon farm until he approached Scottish Sea Farms with his novel adaptation for the sector.

After Spelve was identified as a suitable site for the trial, Etherington’s team installed monitoring equipment for two weeks to gather data on power profiles and trends at the farm. 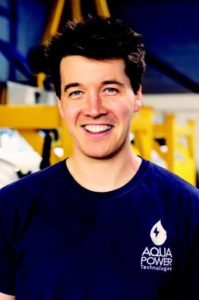 The information was then analysed to understand the carbon and diesel offsets achievable by integrating a hybrid, before a bespoke specification was proposed for Spelve.

‘The hybrid system can be remotely configured farm by farm, according to power needs, to yield the highest savings,’ said Etherington. ‘At Spelve, it’s currently configured to take over with anything less than 10kW, which covers everything except the feed blowers.

‘The peak feeding times are between 10.30am and 2.30pm so all those other hours before and after, the hybrid maintains power to the farm, enabling savings to be made.’

The total annual carbon offset is estimated at 79,400kg, and the annual net saving in diesel costs, based on today’s price, is calculated at around £18,000.

Aqua Power Technologies has an online data platform, AquaStat Internet of Things (IoT), that allows farmers to log on and track real time information, including the amount of carbon and diesel offset and the return on investment.

Spelve is also trialling LED lights on its pens in place of traditional metal halide lamps. These, said Tangny, are much lighter, brighter and use less power.

‘These are only 100W lights yet they produce more luminance than the 400W metal halide lights. They require a lot less power so the diesel saving has been phenomenal, especially combined with the hybrid as well.

‘We would have had the generator running 24 hours a day to power the lights but these LEDs run off the battery pack, no problem.

‘We have observed no difference in fish behaviour, growth or maturation using LED lights instead of metal halide lamps. We can still maintain high levels of fish welfare whilst reducing our carbon footprint and saving money at the same time.’

The real-time monitoring platform has offered an insight into the farm’s power use profile and given the company scope to manage that even better, said Scottish Sea Farms Environment Manager Sheena Gallie.

‘This level of monitoring of our power use is something we wouldn’t have had otherwise. Aside from the direct benefits, there are a lot of other things we can learn.

‘Off the back of the success of the Spelve system, we will be looking to work with Aqua Power Technologies to identify other farms where energy use profiles would indicate its suitability. There is a clear opportunity for the company to reduce its reliance on fossil fuels and, in doing so, significantly reduce carbon emissions.’