New group certification from ASC. ASC’s new Group Certification methodology, which will make applying for ASC certification more accessible for small producers, has been launched at an event in Vietnam.

“Group Certification will help to further drive up aquaculture practices around the world, without lowering the robust requirements of the ASC standards,” said Van Roetert, Head of ASC Programme Assurance. “We are delighted to have launched this in Vietnam, where there are so many smaller producers who can benefit from the opportunity to implement ASC’s requirements.” 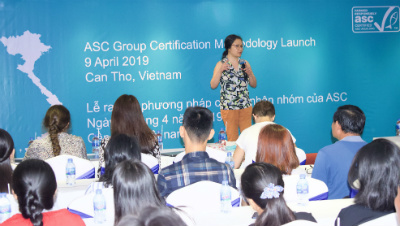 Group Certification has been developed by ASC over several years, guided by a technical working group made up of stakeholders including industry representatives, scientists, and NGOs – see below for a full list of working group members. The process has involved public consultation and seven pilot groups in Indonesia, Vietnam, Bangladesh and Finland.

The launch event took place on 9 April in Can Tho, Vietnam, and was attended by nearly 100 stakeholders. The launch presentation by Van Roetert was followed by a presentation by Mr Tran Dinh Luan, Vice Director of Vietnam’s Directorate of Fisheries (D-Fish), which has previously collaborated with ASC to benchmark some ASC standards to the country’s Vietgap standard. Mr Luan spoke about the benefits of group certification to small-scale farmers and the importance of this small-scale farming to many people’s livelihoods in rural areas of Vietnam.

Another speech was given by Mr Nguyen Van Lam, Director of the ASC certified Cai Bat cooperative in Ca Mau, and the presentations were followed by a workshop for stakeholders. ASC will also be providing more guidance and training on group methodology to farmers and auditors. Other participants at the event included NGOs, ASC producers and suppliers, and those involved in the development and piloting of the new methodology.

Can Tho is situated in the Mekong Delta of Vietnam, an important area for the country’s shrimp and pangasius farming. A significant proportion of shrimp produced in Vietnam comes from small-scale producers who may be able to take advantage of group certification.