Record deal with Wilson – Norwegian Greentech AS has signed its biggest deal to date in the form of a fleet contract with the Norwegian shipping company Wilson ASA.

The agreement means that Norwegian Greentech will deliver ballast water treatment systems for all ships owned by Wilson, primarily during the period 2020–2024. 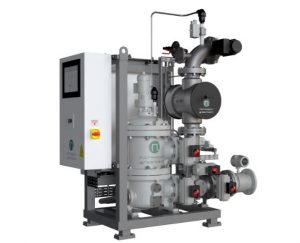 Jon Olav also wishes to take the opportunity to praise Wilson’s technical team for their good cooperation on bringing this deal to the finishing line.

‘This contract gives us a great starting point to further develop our business, both in terms of growth in returns and the number of employees,’ says Sales & Marketing Director Børge Gjelseth.

‘Norwegian Greentech was chosen because they have the whole package we’ve been looking for. Small space requirement, low energy consumption and service mindedness at a competitive price. A few years ago, we were fairly sure we’d have to look abroad to find that kind of service. It’s particularly pleasing in this day and age that a Norwegian supplier won the contract, and that we can therefore help to secure jobs in the years ahead.’