The two new standards add 16 genera to the ASC programme, allowing for the transparent, third-party certification an even greater number of species produced and consumed around the world.

“The addition of these two new standards represents the diversity and wide reach of the growing ASC programme,” said Chris Ninnes, CEO of ASC. “Aquaculture is a truly global industry, and to fulfil our mission to drive up fish farming standards worldwide our standards must reflect the variety of species produced and enjoyed in different regions.”

Estimating up to date global production figures for the species covered within the standards and their destination markets is not easy. Almost all (85%) of SBSB production occurs in the Mediterranean with Greece (127,000t) and Turkey (85,000t) accounting for about half of this. Other Mediterranean producing countries include Croatia, Egypt, Italy, Portugal, Spain and Tunisia. Additionally, around 65,000t of silver seabream is farmed in Japan.

In 2018 total tropical marine finfish farmed production accounted for almost 3.7 million tonnes of global aquaculture production (FAO, SOFIA; 2018). In 2016, FAO aquaculture production information for the species covered under this standard accounted for about 1.5 million tonnes. Farming for these species is dispersed throughout tropical and subtropical Asia and Australasia and important production occurs in China, Indonesia, Malaysia, Philippines, Thailand and Vietnam.

Domestic consumption and inter-regional trade are both important market considerations behind the development of the TMFF standard and request from key consuming markets where ASC is becoming increasingly embedded, including China, Hong Kong, Japan and Singapore, were integrated to the rationale for the creation of this standard. Many of the species covered by this standard are traded live and are featured in many retail chains and restaurants in the region. This is not the only aspect of trade however and in the ever-increasingly sophisticated distribution and retailing in the region chilled, pre-packed and frozen products are common.

Farming production for the species covered under the flatfish standard is estimated at around 175 – 200,000 tonnes (FAO, 2016 and various national statistics). The majority (91%) of production occurs in Korea and China, with most of the remaining production taking place in Spain, Portugal and Japan (7%). Flatfish are an important part of the live-fish retail trade in China and Korea and are high-end fresh fish in Southern Europe and Japan.

How Does ASC Develop New Standards?

Key to developing any new ASC standard is the engagement of a broad range of stakeholders with an interest in the farming of the species covered. This diversity includes farmers, farming associations, NGOs, academics, supply chain companies, retailers and food service companies. All stages of the development process are featured on our website from the original publication of our intent to develop the standard, a consultation period on the Terms of Reference (TOR) and scope of the standard through to the publication of public consultation draft and the resulting stakeholder comments. All of these processes intersect the ASC’s two multi-stakeholder governance chambers, the Technical Advisory Group (TAG) and the Supervisory Board. These guide the technical development of the content and its final approval respectively.

To develop the draft content for all three standards, material was drawn from existing standards; but the content was significantly informed and subsequently modified as a result of the site visits undertaken with key stakeholders and public consultation rounds. As with all ASC standards, both environmental and social impacts are addressed. Requirements include the traceable sourcing of fingerlings and seed-stock from hatcheries with documented biosecurity and fish health protocols; the recording of greenhouse gas emissions and a strategy to reduce them over time; biodiversity impact assessments produced focusing on vulnerable or economically important species in the area around the farm; and the gradual reduction in the use of marine ingredients in feed.

Site visits for Sea Bass, Sea Bream, and Meagre were conducted during the early part of 2017 in Greece, Spain, Croatia, Turkey, and Japan, helpfully assisted by WWF offices in Greece, Croatia and Japan. During these visits draft audit manuals were piloted to identify any gaps between the existing standards content and farming practices and performance of the new species. The resulting draft standards were then the subject of two public comment periods (which follows ASC’s Standard Setting protocol; which is compliant with ISEAL’s Standards Setting Code v6.0). During the public consultation further stakeholder outreach was done through video and conference calls between WWF Greece and WWF Croatia and the rest of the WWF Europe Network and with in-person meetings between WWF Japan and interested Japanese stakeholders to solicit feedback into the consultation process.

The development of the TMFF standard has had a longer history. In 2013 WWF Indonesia and the WWF Coral Triangle Programme initiated a stakeholder dialogue to develop a standard for Grouper, Snapper and Barrumundi. In late 2016 the ASC was formerly requested to finalise the standard’s development and the scope of species covered was expanded (see Endnote iii). The ASC undertook two sixty-day public consultation rounds initiated in May 2017 and August 2017 that were compliant with ISEAL’s Standards Setting Code v6.0.

In 2016 the ASC initiated a standard development process for the commercially farmed flatfish species in accordance with ISEAL’s Standard Setting Code. A TOR was published for comment in April 2017 and public consultations held in May and August the same year. The development of the standard followed a similar approach as undertaken for SBSB. Extensive pilot activities were undertaken in key producing regions as indicated below. Both in China and in Korea access to production and technical expertise was facilitated by CAPPMA and the Jeju Island flatfish producers association. CAPPMA hosts a Turbot Commission within its governance, providing a conduit for the collective voice for the many thousands of turbot farmers in China. 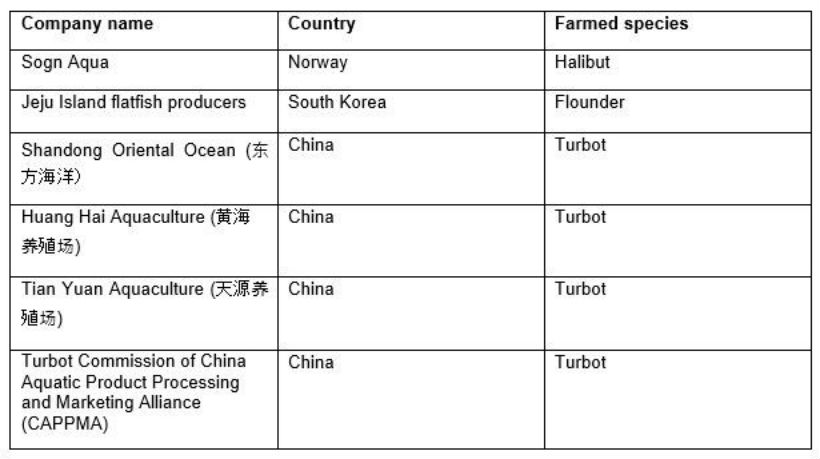 Over the course of six rounds of public consultation for the three standards the ASC received substantial and substantive comments from stakeholders. In total 21 organisations submitted comments about 86 different indicators. Stakeholders main concerns related to the following four Principles within the standard:

Principle 3: Protect the health and genetic integrity of wild populations

Principle 4: Use resources in an environmentally efficient and responsible manner

Principle 5: Manage disease and parasites in an environmentally responsible manner

And related to the following metric indicators for:

Version 1.2 of the ASC Pangasius Standard was also concurrently released today. The new version includes revisions that were finalised after multiple rounds of public consultations and will provide for increased protection of wetlands near pangasius farms, requirements to include fish meal and fish oil from IFFO RS certified sites or fisheries with lower FishSource scores (FS) and the disclosure of transgenic plant and plant-derived ingredients in feed. The latest revision will also add additional requirements regarding antibiotics, as farms will have to verify the total amount of each antibiotic active ingredient used per tonne of fish produced per year and of the frequency of treatments. As with all ASC standards, farms are not allowed to use any antibiotics on the World Health Organizations list of medicines critically important to human health.

Just as with the two new standards release today (01.07.2019), the pangasius standard will also have a six-month effective period which will end on December 26, 2019 when farms will begin to be audited against the updated version of the ASC Pangasius Standard.

* – Scope of the SBSB, FF, TMFF standards applies to the following genera & species:

i – The scope of the SBSB Standard applies to all species belonging to the genera: Dicentrarchus, Sparus, Pagrus and Argyrosomus.

ii – The scope of the FF Standard applies to all species belonging to the genera: Paralichthys, Scophthalmus, and Hippoglossus.