Having had the opportunity to read the Brexit agreement hailed as a great success by the UK Government the CFPO has given its thoughts below from a Cornish fishing perspective.
Cornish fishermen were clear from the outset that the outcome of any Brexit deal would be measured against clearly defined priorities that were understood and agreed by the UK government.

Full and absolute control of UK waters out to 200 miles (or the median line) was a stated objective for the UK. In effect EU access remains the same as now, for a minimum of five and a half years and most likely beyond given the wording of clauses in the agreement, including within the UK’s 6-12-mile limit. UK Government failed to deliver.
Stopping access to UK territorial waters (within 6 -12m) for EU fishing vessels was a red line for the UK and seen as critical to many Cornish fishermen and their coastal communities. UK Government failed to deliver.

Zonal attachment (ZA) for quota allocation was the stated UK objective. ZA was calculated by CEFAS and DEFRA using several robust scientific criteria. UK Government failed to deliver (just a few examples in the table below). 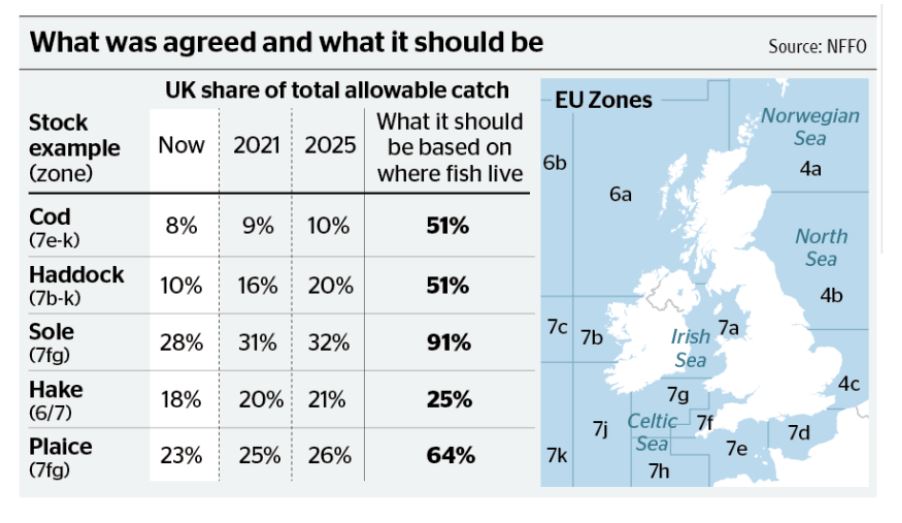 The free trade agreement means UK fish exports will not attract tariffs, which is a positive.
However, exports will now require catch certificates, health certificates and be subject to new border controls.
This was not a good deal for Cornish or British Fishermen.

The anger and frustration were then compounded for fishermen by the outright lie that this was a good deal for fishing from the Prime Minister and others in Government. They should have the backbone to say the deal was good for the UK in their opinion, but they had to sell out fishing to get that deal.

Prior to the announcement of this agreement optimism in the fishing industry was at an all-time high, as promises of an exclusive 12-mile limit for UK inshore fishermen, fishing opportunities based on zonal attachment and control over regulations were all promised by Prime Minister, Secretary of State and many MPs.

That optimism has been shattered by broken promises and betrayal by Boris Johnson and his Government in a Ted Heath style moment that saw fishing sacrificed again.
The Cornish fishing industry has been used and abused; used as a poster boy and illustration of what the UK could gain through Brexit and taking back control. Abused by being sold out in the final analyses for others. Any shred of trust fishermen had in politicians will be difficult to ever rebuild.

The £100 million support package spoken about by Johnson and Gove is nothing more than a cheap insult and in truth is a pathetic attempt to cover what we and they know to be a betrayal of Cornish and British fishermen.

It has never been about money for fishermen it has been about a fair deal that secured control over our fishing waters and a fair share of fishing opportunities (quota) based on zonal attachment.
This is not the deal fishermen were promised and it is important MPs and the public understand this and are not misled by Government spin to the contrary.

The UK Government has a responsibility now to support the Cornish and wider UK fishing industry with actions, not words – proper control and regulation of EU fleets that will continue to fish within sight of Newlyn Harbour would be a good start!