Kingfish Maine to File its First DEP Permit Application  – The Maine Pollutant Discharge Elimination System Permit (MEPDES) Application is one of the more critical permits required for the operation of a land based farming facility.

Kingfish Maine files its first pre-permitting application as part of its plan to build a proprietary land-based aquaculture facility in Jonesport. This week, Kingfish Maine notified residents and abutters to its 9 Dun Garvin Road property that the company is submitting its Maine Pollutant Discharge Elimination System Permit (MEPDES) application to the Maine Department of Environmental Protection within the next month.

Kingfish Maine’s recirculating aquaculture system (RAS) facility is projected to produce 6,000 -8,000 metric tons of yellowtail annually upon completion. The MEPDES permit is one of the most critical permits for operation of the new facility. Kingfish Maine will discuss the permitting application at a public meeting on July 21st in Jonesport. 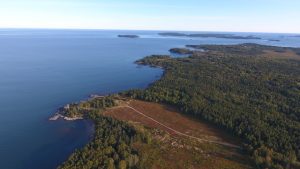 “Our team has been actively engaged with Jonesport residents for the last 18 months, outlining  our plans and identifying any concerns residents and lobstermen may have,” said Megan Sorby, Kingfish Maine’s Operations Manager. “Two areas of interest we’ve discussed are the intake and discharge pipes as well as the temperature of the water we release back into Chandler Bay. We are confident this application addresses those concerns in a matter that will please everyone who lives and fishes in this area.”

Kingfish Maine is owned by The Kingfish Company, which currently operates a land-based recirculating aquaculture system (RAS) in the Netherlands. Kingfish Zeeland has been awarded a number of sustainable practice certifications:  It’s the first land-based farm to receive Best Aquaculture Practices certification and the first Aquaculture Stewardship Council certified source of yellowtail kingfish.

“Our Maine facility will be designed with the same advanced technology we use at our Kingfish Zeeland facility, which operates in a nature reserve,” said Ohad Maiman, CEO of the Kingfish Company. “We are investing in an advanced filtration and heat exchange system which will allow us to reclaim heat from the water,  therefore preventing temperature rise in the bay. Our designers and engineers listened to the concerns of residents and are also minimizing the pipe footprint to just below half a mile.”

Kingfish Maine has currently engaged the University of Maine to conduct an economic impact study for Jonesport and the region. Preliminary data from the study shows a potential value-added, multiplier impact of $46 million to the region. Kingfish Maine is expected to employ 70 full-time positions at full production.

Kingfish Maine will outline its MEPDES application in a public meeting on Tuesday, July 21st at 6pm at the Jonesport Fire Station, respecting the state’s social distancing guidelines.