The Italian-based awards recognise the finest foods from across the globe and are judged by independent professionals from the food and beverage industry. All products are blind tasted.

Grants Oak Smoked, which is based in Maryport, Cumbria, scooped two gold medals. 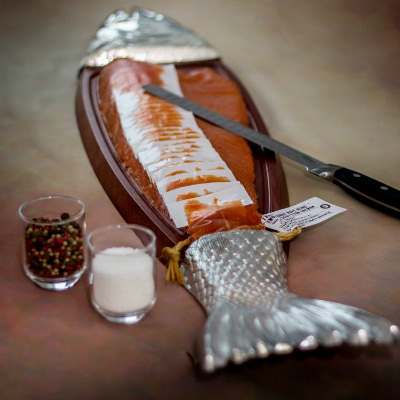 Grants, which was established in 1983, supplies smoked salmon to hotels, restaurants, retailers and food companies across the globe.

“These two gold medals are a terrific early Christmas present and cap off an astounding year for us.

“Our Rope Hung smoked salmon won another Monde Gold Award and was the only independent smokehouse product to get the Good Housekeeping Taste Approved honour.

“Furthermore, we became the only smokehouse in the UK to hold the international BAP accreditation which promotes the highest standards in aquaculture and seafood production.

“Such awards are testament to the principles of quality the business was founded on, and prove using the very best salmon and smoking it the traditional way, over real oak chips, is a recipe for outstanding success.”

Grants Traditionally Smoked Rope Hung Scottish Salmon pays homage to the oldest traditions of the craft. Hand selected fish are cured in sea salt and then rope hung by the tail in a brick kiln. They are then smoked over oak chips from Scottish whisky barrels. The smoked salmon is then left to rest before being hand sliced.

Grants Traditionally Cured and Smoked Tzar Cut Salmon is the tenderloin fillet from individually selected fish. The “Tzar cut” gets its name from being the historical preference of Russian Tzars as it is most tender and succulent part of the fish.

The salmon is traditionally cured and then cold smoked over real oak chips. The tenderloin is then hand cut from the fish.

Mr Brown added: “Winning so many awards in 2019 proves we continue to lead the industry in producing smoked salmon which is not only the finest tasting, but which is also responsibly sourced and produced.

“We are proud to export our smoked salmon right across the globe from our premises at the edge of the Lake District, and these awards reflect the care, professionalism and commitment of everyone who works at Grants. We look forward to further success in 2020.”