Grey Mullet Hatchery Breakthrough – ICAR-CIBA announced the indigenous hatchery technology for grey mullet, which can drive the blue revolution initiatives of the Government of India.

In a major breakthrough, the Central Institute of Brackish water Aquaculture (CIBA) has successfully bred Grey Mullet (Madavai), a high-valued commercial brackish water fish, for the first time in the country in line with Government of India‘s push on increasing fish production under blue revolution mission.

The grey mullet is a highly sought-after brackish water fish for farming, for which farmers have been waiting for more than thirty years. 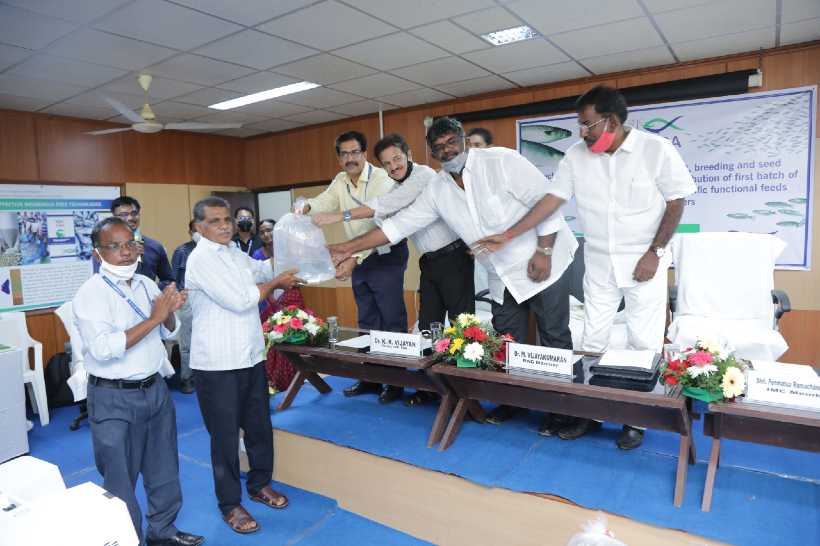 As a part of this event, the first batch of hatchery produced grey mullet seeds, and species-specific feeds for grey mullet were distributed to the enterprising farmers from Andhra Pradesh, Tamil Nadu and Kerala.

Grey mullets are the preferred choice of consumers due to its taste, texture, less spines, nutritive value, and the fish relished by consumers fetches good market price in the range of Rs 350 to Rs 500 per kg.

Fast growth rates and omnivorous feeding habit, acceptance of formulated pellet feed makes this vegetarian fish an ideal fish candidate fish not only for brackish water farming, but for freshwater and marine farming.

Director Dr KK Vijayan, highlighted the versatility of the fish that it can be farmed in diverse farming systems such as  mono culture,  poly culture and  integrated multitrophic aquaculture mode (IMTA), with potential output of 4 tonnes per hectare/crop, with high profitability. 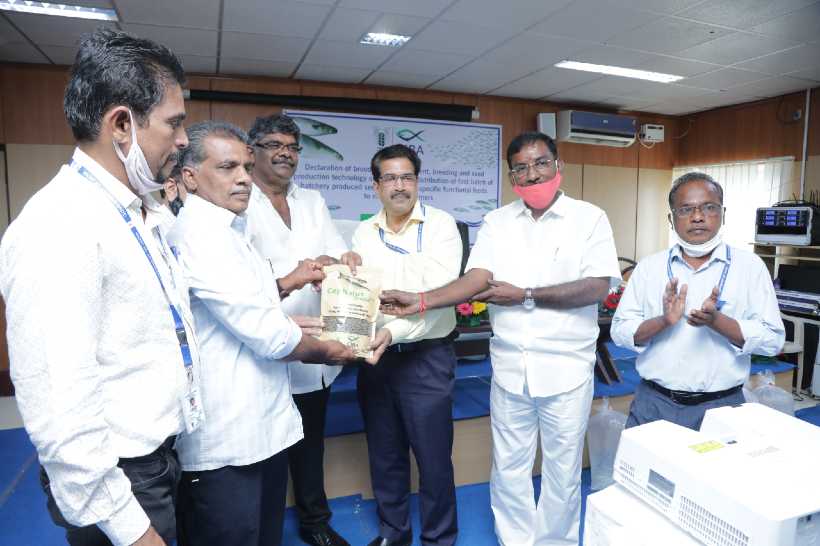 Considering its significance in brackish water aquaculture, CIBA has given greater impetus in the breeding of grey mullet since 2015, giving special focus on developing a captive broodstock and breeding.

As a result of these efforts, successful breeding and larval production were achieved using pond reared broodstock in 2016-17. This season by December-January, CIBA has completed producing its third batch of hatchery-reared grey mullet fingerlings,” Dr Vijayan said.

Further, CIBA released the indigenous species specific functional pelleted feeds for the broodstock (Cephalus BroodPlus) and nursery (Cephalus NurseryPlus), developed by the Nutrition division. Mullet naturally being an omnivorous detritivore in feeding habit, they can be farmed efficiently using the dry formulated feeds with maximum profit to the farmers.

This is a great achievement by CIBA towards species diversification to increase the fish production in the enormous stretch of underutilized brackishwater resource in the country, Dr JK Jena, DDG, (Fisheries) of ICAR, said during the release of the hatchery technology. DDG congratulated the team of scientist from fish culture division and CIBA in this unique achievement, a landmark in the Indian brackishwater Aquaculture.

CIBA has already made a commendable progress in seed production of various brackish water food fish species like Asian seabass, milkfish, pearlspot, whiskered catfish and also ornamental species such as spotted scat, moon fish, orange chromide. The innovative aquafarmers who received the hatchery produced grey mullet seed were happy with the new technology and expressed their happiness in this new addition in the species farming basket, ‘we expect it will bring significant transformation in the brackish water sector,’ the farmers added during the occasion. ***