As the exclusive supplier of M&S farmed salmon, Scottish Sea Farms has been working with the major UK retailer to reduce the use of expanded polystyrene (EPS) packaging.

For many years, EPS has been the preferred packaging solution amongst those transporting fresh produce such as fish, owing to its lightweight insulating properties which preserve temperature and quality.

However, as a single-use packaging solution with limited options for recycling, EPS is not without an environmental footprint.

A study commissioned by Scottish Sea Farms and undertaken by the Caledonian Environment Centre at Glasgow Caledonian University found that replacing EPS boxes with returnable and reusable bulk bins would not only eliminate more plastic, but it would also significantly reduce the carbon used: from production, processing and transport, through to washing and recycling.

Following extensive trials to research, test and identify the best model, along with significant investment in new equipment and processes, Scottish Sea Farms first introduced bulk bins to M&S deliveries in June 2017. To date, over 780,000 polystyrene boxes have been replaced as a result, saving an estimated 4,100 tonnes of CO2.

Commenting on the Innovation Award, Scottish Sea Farms’ Processing Manager Donald Buchanan said: “Ensuring that we’re operating in the most ethical and environmentally responsible way is a key objective both for Scottish Sea Farms and for M&S with its industry-leading Plan A.

“This latest collaboration takes us another step forward in our drive to reduce the use of plastics in our activities and has been made possible thanks to the support and cooperation of the entire supply chain.”

Head of Agriculture and Fisheries at M&S Steve McLean said: “We are committed to producing food as sustainably as possible, so it is heartening to hear about a project like the one launched by Scottish Sea Farms to move away from EPS packaging and reduce their carbon footprint.

“The business has remained committed to their initial idea over several years and invested significantly into the project. All of this hard work has now paid off and they have successfully established a new way to transport harvested fish in a far more environmentally friendly way.”

Scottish Sea Farms is now exploring new eco-friendly packaging solutions for its export customers, along with diverting potential waste into valuable by-products – for example, by capturing and re-using Omega-rich blood in animal feed and selling viscera for use in agricultural fertiliser. 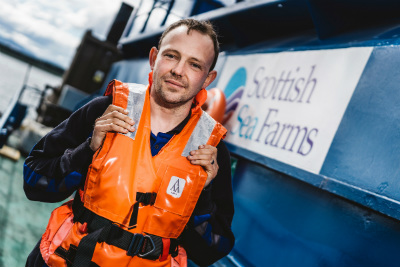 The salmon grower’s processing and supply teams weren’t the only ones to be recognised at the M&S Select Farm Awards which took place on the first day of the Royal Highland Show at Ingliston in Edinburgh.

In the four short years since joining Scottish Sea Farms, 32-year old Alan has progressed from a trainee role to senior husbandry, been crowned LANTRA Aquaculture Learner of the Year 2018, then most recently taken up his first Farm Manager role with the company.