Beal’s Lobster Pier celebrates 90th anniversary.  It’s been a challenging 2+ years for most US restaurants.

But at Beal’s Lobster Pier https://www.bealslobster.com/ in Southwest Harbour, Maine, business remained steady due to its decades old brand and direct-to-consumer business….and as a result the Mount Desert Island landmark will celebrate its 90th anniversary this summer serving its fresh lobsters, and award-winning lobster rolls, clams, and fresh seafood. 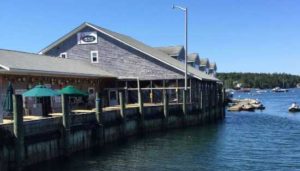 What Harvard Beal founded in 1932 as a wholesale fish market, today has become a Maine landmark and a go-to waterfront dining destination and experience.

Like all success stories, Beal’s evolved and in 1969 after almost four decades as a wholesale operation, the third generation of the Beal’s family opened a restaurant: Beal’s Lobster Pier, which has become one of Maine’s great food destinations for the over three million people who visit Mt. Desert Island, Bar Harbour and Acadia National Park.

A fully functional, working lobster/fish pier and restaurant, people come from all over United States and the world to eat and experience the waterfront and fishing boats unloading their catch. And that waterfront experience will be further enhanced this summer as Beal’s has renovated its upstairs dining area, providing additional stunning harbor views.

In 2014, Stuart Snyder and Russ Bernard, purchased Beal’s from Mary Beal, the widow of the third generation owner Sam Beal. Snyder and Bernard, long-time visitors to Maine and Beal’s customers, not only retained the essence of the restaurant while expanding the menu and service, but they also took the brand nationally.

They created “Beal’s at Home,” a direct-to-consumer service, shipping its lobsters via its website and through Goldbelly, an online seller for regional foods. Today, Beal’s lobsters can be shipped from Southwest Harbor to Hawaii.

According to Snyder, the Beal’s brand will continue to expand through its’ expansion of its direct to consumer online offerings, and ultimately food trucks and potential future Beal’s branded restaurant locations. Additionally, the company has recently purchased the Log Cabin Restaurant location on Mt. Desert Island with a planned opening in 2023.

Named one of Maine’s Best Lobster Rolls by GQ Magazine, Beal’s is all about family. Snyder regularly greets dinners daily, his nephew Justin is Dock Manager, Mary Beal’s granddaughter Emma is a key member of the restaurant team and over the years, several members of both families have worked at the pier.

Snyder and Bernard take great pride that many of the Beal’s team has worked at the pier and restaurant for many years, from high school through college and beyond.

The 90th anniversary of Beal’s Lobster Pier is a great food, travel, and business success story.