Climate Champions Receive Honorary Doctorates from the University of Stirling.

Lewis Pugh and Mike Robinson – two public figures who have dedicated their lives to campaigning for the environment received their honorary doctorates at a ceremony held earlier today.

Endurance swimmer and environmental diplomat, Mr Pugh – who has been instrumental in protecting more than two million square kilometres of vulnerable ocean – was recognised for his outstanding contribution to sport and international environmental issues.

Mr Robinson, the Chief Executive of the Royal Scottish Geographical Society (RSGS), was pivotal in establishing the diverse and impactful coalition Stop Climate Chaos Scotland. He was recognised for his outstanding commitment to delivering and embedding climate solutions to protect the world.

They received their honorary doctorates at graduation ceremonies on the University of Stirling campus today. Across four ceremonies held today and tomorrow, a total of 1,925 students will graduate from the University, joining its 100,000-strong global alumni community.

Speaking after receiving his honorary degree, Mr Pugh drew parallels between his environmental work and the world-leading research conducted by the University of Stirling, home to Scotland’s International Environment Centre and the Institute of Aquaculture.

Lewis Pugh said: “I am delighted and humbled to receive this recognition and become a Doctor of the University of Stirling. I have enjoyed visiting the Stirling campus, and speaking with students and staff, including scientists conducting vital research into the climate crisis and its impacts.

“There is much synergy between the mission of the Lewis Pugh Foundation to draw attention to the environmental crises playing out in our oceans – such as overfishing, wildlife decline, global warming and plastic pollution – and the impactful research being conducted in this area at Stirling. I look forward to working with the University in the future.”

Reacting to his honorary doctorate, Mr Robinson, an alumnus of the University, said: “I am absolutely delighted to accept this honorary degree. As a graduate of Stirling, it is an especial honour, indeed it is an important institution in our family – I met my wife at Stirling and my son is also now a student, so it is very close to my heart. I could not be more pleased.” 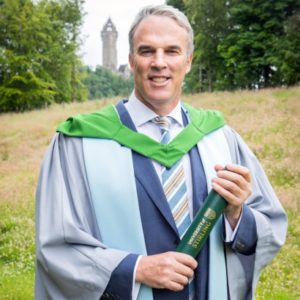 Mr Pugh draws attention to the plight of the world’s vulnerable ecosystems by taking on mammoth swim challenges and he was the first person to complete a long-distance swim in every ocean across the world. In a career spanning 35 years, he has pioneered more swims around famous landmarks than any other swimmer in history with his feats including the North Pole, a glacial lake on Mount Everest and the English Channel. He is the United Nations Patron of the Oceans; and his dream is to protect 30% of the world’s oceans by 2030. 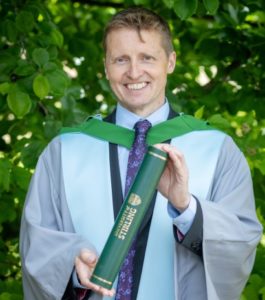 A Stirling alumnus, Mr Robinson decided to devote his life to protecting the forest and the environment after he was left shocked by the impact of humans on nature during a trip to Borneo. He has been Chief Executive of the RSGS since 2008, having previously worked for the Royal Society for the Protection of Birds and the Royal Botanical Gardens of Edinburgh, and was pivotal in bringing together 60 different organisations under the banner of Stop Climate Chaos Scotland – which has played a key role in driving and influencing decisions on Scotland’s climate targets and activity.

He is a key supporter of the University, helping in the establishment of Scotland’s International Environment Centre, and working with Stirling colleagues – in collaboration with the University of Edinburgh – on the creation of a new Climate Solutions qualification for business leaders.

Tomorrow will see the graduation of students from the Faculty of Health Sciences and Sport (health graduates), Faculty of Arts and Humanities, and the University of Stirling Management School. Women and children’s rights campaigner Lydia Okroj and Paralympian gold medallist David Smith MBE will receive honorary degrees at those ceremonies.

The University hosts three annual graduations – in spring, summer, and winter. In addition to the 1,925 graduates from the Class of 2022, this summer’s event also welcomed back around 2,000 graduates from 2020 and 2021 who missed out on a ceremony due to the pandemic. They returned to campus between 21 and 27 June to celebrate with their families, friends, and staff.

Professor Sir Gerry McCormac, Principal and Vice-Chancellor of the University of Stirling, said: “Summer graduation is always a highlight in the university calendar – but this fortnight of events has been incredibly special, as we’ve been able to celebrate three cohorts of students – from 2020, 2021 and 2022.

“We’re delighted that they are joined by four outstanding honorary graduates who are making a real difference to the world in their respective fields and are excellent, inspirational role models for our students and graduates.

“Congratulations to all who have graduated over this two-week period.”