FIRST HARVEST OF ORGANIC SALMON IN SCOTLAND FOR MOWI 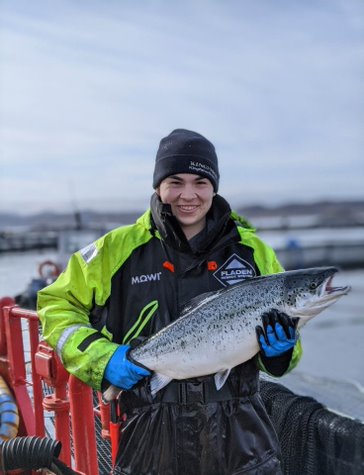 The organic salmon, which is also certified to EU organic standards and approved by Agriculture Biologique in France, will be sold under newly created brand, the Scottish Organic Salmon Company.

Rory Campbell, technical manager, wrote a thesis about organic salmon production as part of his recent MBA. Years of planning and collaboration with the farming, technical, processing and sales teams in Ireland followed, as he told The Scoop:

“The whole journey from idea inception to gaining organic certification and the first fish being harvestedhas been a really great example of what it means to work at Mowi and how we live our values. Everybody involved in this project has put in a great deal of time, hard work and effort, and it’s been really great to see everything finally come together with the first organic harvest at Loch Ewe.”

From feed to fork

In order to achieve organic certification with the Soil Association, every step of the process of farming salmon must conform to the robust criteria. This includes the feed itself – in this case produced at Mowi’s Feed Mill in Kyleakin – the farm at Loch Ewe and the processing plant at Blar Mhor.

The organic feed produced at Kyleakin is regulated by EU legislation and meets the criteria for both the Soil
Association and Naturland in Germany.

The Soil Association mandates that stocking density must be less than 10 kilos per cubic metre. Antifoulants cannot be used on nets and the use of medicines and pesticides is also restricted. Seabed sampling is carried out every year.

Organic salmon must be processed within strict timeframes and must be the first product on the schedule.

Every site involved in the production cycle of the organic salmon has to be inspected each year to retain the Soil Association certification.

The organic salmon market is still relatively small, however, it is hoped that by increasing the supply of organic salmon, Mowi can accelerate the market as Pat Connors, sales and processing director in Ireland, explains:

“From our 20 years of experience of producing and selling organic salmon, we know that retailers are reluctant to push it to the same extent as conventional salmon because there just isn’t the same guaranteed continuity of supply. Mowi has been confident of supplying organic salmon for nine months of the year, now with the additional Scottish organic volumes, we are confident that we can have continuity of supply 52 weeks of the year.”

The demand for organic salmon is expected to grow due to increased attention on animal welfare and the
fact that it offers healthy levels of eicosapentaenoic (EPA) and docosahexaenoic acids (DHA).

The Scottish organic salmon will be sold by the Mowi Organic team in Ireland as Georgina Wright, head of sales, adds:

“It makes complete sense to sell our Scottish organic salmon through our existing highly experienced organic sales team in Ireland. It is a high value product which requires in-depth knowledge of organic standards. One box of organic product requires the same focus and detail as an entire truck of our conventional salmon so by using the expertise we already have we are establishing one clear voice and strategy for Mowi Organic.”

Congratulations to all the teams in Ireland and Scotland for making this happen.