Scottish salmon healthier than expected and provides 70% of daily vitamin D needs, according to a new study. A new nutritional analysis of Scottish salmon carried out by the University of Stirling has found that a single portion is even healthier than previously thought and provides more than 70 per cent of daily vitamin D needs.

The study by the Nutritional Analytical Service also revealed that salmon has 4.5 times the daily recommendation for special omega-3 fats found in marine foods, more than half our protein needs, and 42 per cent of the vitamin E recommendation.

The study collected 15 samples of farm-raised Scottish salmon flesh, representative of typical Scottish produce, and put them through a variety of laboratory tests to assess nutrient levels.
The new figures for vitamin D and omega-3s are 7 to 8 per cent higher than previous tests conducted in 2003 and 2020. 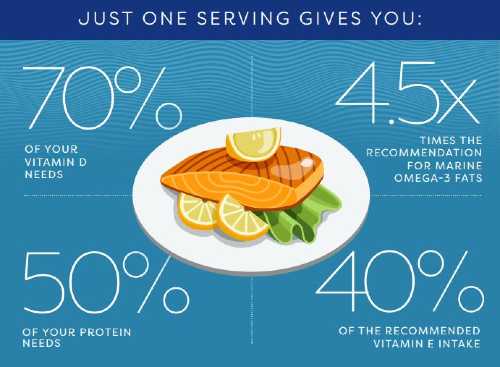 Expert dietitians recommend that adults and children should eat two weekly servings of fish – and one of these should be oily fish, like Scottish farm-raised salmon.
Vitamin D is particularly important at this time of year, when the lack of sunshine in Scotland makes it harder for humans to produce it naturally.

The new study was commissioned by Salmon Scotland, the voice of Scottish farm-raised salmon – the UK’s biggest food export – and conducted independently by the Nutrition Analytical Service at the Institute of Aquaculture, University of Stirling.

“Vitamin D is essential for normal immune function, something focussing everyone’s mind at the moment, as well as supporting bones, muscles and teeth.

“More than a quarter of us are vitamin D deficient and this only gets worse in the winter when sunshine – which stimulates our bodies to make vitamin D – is in short supply.

“Omega-3 fats from marine foods – nutrients that many of us lack because we don’t eat enough fish – are proven to support vision and heart function. Experts also say these important fats contribute to infant development when eaten by mums during pregnancy and breastfeeding.

“If everyone followed advice to eat one serving of oily fish a week, such as a tasty fillet of farm-raised Scottish salmon, we would get more than two thirds of our weekly omega-3 recommendation in that single meal.”

“Scottish salmon is the best, healthiest and most nutritious product that we can present to consumers whether here in the UK or around the world.

“Year-on-year improvements to the way producers in Scotland are rearing and feeding their stock seems to have paid off in terms of the nutritional value of salmon.

“It’s fantastic news that this new expert study has found salmon is healthier than ever.

“This only adds to our knowledge about the benefits of choosing foods from Scotland’s extensive and high-quality larder.”