To take account of slightly different moulting seasons, the closure begins with boats which fish off the west side of the islands. Their eight-week stoppage is followed consecutively by an eight-week closure for east side boats.

This year, on the west side it is prohibited to land velvets, keep them on the boat or to store them from Monday 13th June to Sunday 7th August. For east-side boats the dates are Monday 8th August to Sunday 2nd October.

The Shetland Shellfish Management Organisation has a map which divides inshore waters into squares and delineates which are west and east. 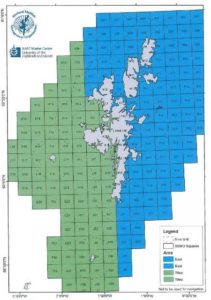 The velvet crab, or alternately velvet swimming crab, devil crab, “fighter crab”, or lady crab, Necora puber, is a species of crab. It is the largest of the swimming crab family (Portunidae) found in British coastal waters. It has a carapace width of up to 100 millimetres (3.9 in), and is the only species in the genus Necora. Its body is coated with short hairs, giving the animal a velvety texture, hence the common name. It is one of the major crab species for United Kingdom fisheries, in spite of its relatively small size.

The velvet crab lives from southern Norway to Western Sahara in the North Sea and in North Atlantic as well as in the western parts of the Mediterranean Sea, on the rocky bottom from the shoreline to a depth of about 65 metres (213 ft). The last pair of pereiopods are flattened to facilitate swimming.