SSPO UPDATE ON USE OF ADDs

SSPO Update on use of ADDs

The Scottish Salmon Producers Organisation (SSPO)  has announced that the sector is no longer using acoustic deterrent devices (ADDs) that may have been considered to cause disturbance to European Protected Species.

ADDs are used by a number of marine sector’s including offshore construction and engineering to deter marine mammals from installations, to protect animals, people and infrastructure.

In Scotland farmers have a moral and legal responsibility to protect their fish and ADDs were used by some salmon producers as part of the toolkit for managing predation by seals, in conjunction with other deterrent technologies and innovations including anti-predation netting, seal blinds and new net tensioning methods.

The only circumstances in which Scottish salmon producers will use ADDs in future is where ADDs comply with both Marine Scotland and U.S. MMPA requirements and operators have been provided with evidence from suppliers of the devices’ compliance. 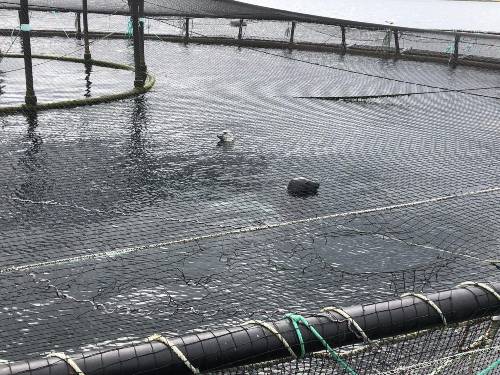 This announcement by the SSPO coincides with a Marine Scotland report into ADDs to be laid before the Scottish Parliament on March 1st. Scotland’s salmon farmers are awaiting guidance from the Scottish Government and the US on the use of predation devices.

“Scottish salmon farmers are not using any acoustic deterrent devices that may have been considered to endanger cetaceans such as dolphins, porpoises and whales. All devices the sector does not have total confidence in, with regards to the harming of protected species, have been turned off and removed from the marine environment.

“It is critical however that farmers have deterrents available to protect their livestock from seal predation. As such the Scottish salmon farming sector is committed to, where necessary, only using acoustic devices that have been scientifically proven to be compliant with the U.S. Marine Mammals Protection Act (MMPA).”

area to ensure that farmers can continue to deploy these tools, which play a useful role in managing seal predation and improving animal welfare.

“Scotland’s salmon farmers are committed to farming in the most responsible way. This announcement illustrates our commitment to long-term sustainability.”

Salmon farmers in Scotland recognise and welcome the value of further research to refine and enhance acoustic devices that can protect farmed fish without disruption to other species. This has included working with several academic institutions to develop the science in this field.

New generation acoustic deterrent devices have been developed to use a different range of frequencies and volumes to help deter seals, while better safeguarding cetaceans.

In November 2020 the Scottish salmon farming sector launched a ground-breaking Sustainability Charter: A Better Future For Us All – a core pledge of which is to apply the highest standards of animal welfare and to introduce and apply best practice for managing all such issues: farmed or wild.