Scores of local boats have hauled up fine mesh twine in their own nets and at least one had to sail for home for costly repairs after its propeller was fouled by longlines. 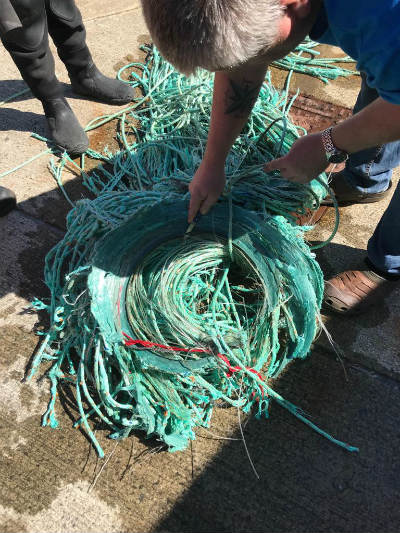 The problem is being exacerbated by a lack of proper communication and often aggressive behaviour by the predominantly Spanish and French skippers.

Many gill netters leave their nets in position when they steam south to Ullapool to land, denying access to local boats that have fished these waters for decades.

On working on grounds 30-50 miles west of Shetland, Alison Kay skipper James Anderson said: “We’ve been fishing here for the last 10 years, but this year there was a line of three boats with enough nets to cover the whole area.

“All in all there were 10 German-flagged Spanish boats with no track record of fishing here taking up I reckon 200 square miles.

“In years gone by they may have been here, but there were fewer of them and they were much further out, much deeper. They’re aggressive too, telling us: ‘This is the area we fish, keep clear for 90 days.’

“We’ve lost a lot of fishing because of this, and because they leave the gear we get caught in it and have to haul it up. It’s fine mesh plastic, a right mess. 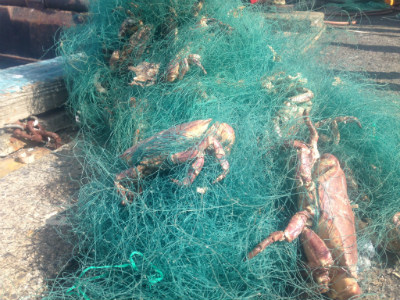 “The Icelandic and Norwegian governments have severely limited this type of fishing, and it’s about time the UK and Scottish governments did so too.”

Gordon Irvine, skipper of the Defiant, said the number of gill netters and longliners in local waters had doubled in the past two years.

“The problem is their attitude. They seem to think we can just move on, but they shoot their gear wherever they like and many times it boxes us in and we have to steam clear. If we tried anything like that off Spain or France there would be an outcry.”

The Defiant had to make for Baltasound and employ divers to remove longlines last year after its propeller was fouled.

“We had just been in landing and when we went back out the longliners had moved to where we had been fishing before.

“We were steaming and one of them came in far too close. We weren’t sure if he shot his lines across us or how it got into the propeller, but we spoke to him and shot clear of his gear.

“When the boys went to bed they could feel the vibration in the cabin, so we heaved and went into Baltasound to get the divers.”

Shetland Fishermen’s Association executive officer Simon Collins said: “At a time when the public is rightly concerned about the amount of plastic dumped in the sea, it is particularly galling for our skippers to be forced off local fishing grounds by vessels that leave so much rubbish behind them.

“In the past few months the problem has intensified as they have come closer to our shores.

“They seem unconcerned about the plastic debris that they are polluting the seas with, really fine mesh and lines that pollute our waters, harm wildlife and foul our boats.

“Equally, many of them have behaved in a needlessly aggressive manner.

“We urge the Scottish government to regulate these vessels’ access to our waters as soon as it can do so once we leave the Common Fisheries Policy, as part of the normal cycle of negotiations between coastal States. In the meantime we need the authorities to use the powers they do have to limit the damage.”